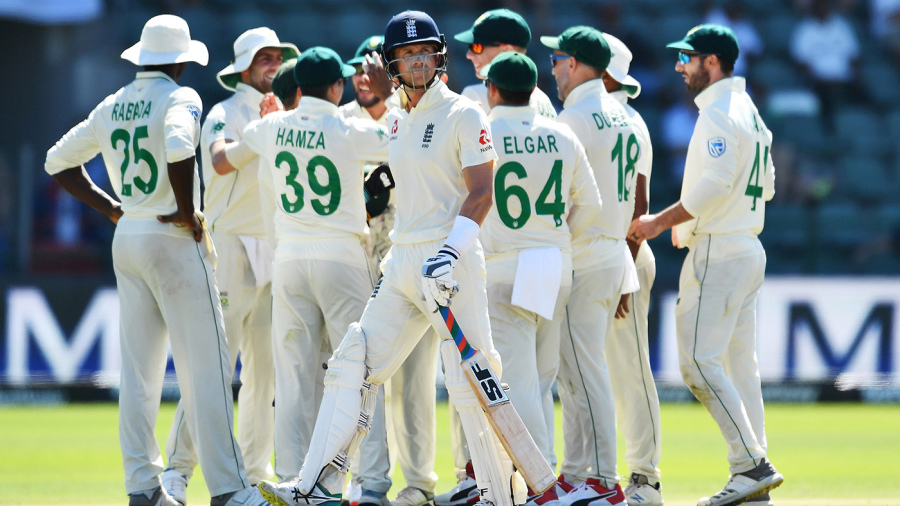 Test cricket can do funny things to your perception of time, and you can’t have the drama of fifth-day finishes such as the Cape Town Test without some longueurs in between. However, by any measure this was slow going as the series resumed in Port Elizabeth, with England puttering along in attritional conditions to give themselves a platform from which they will hope to dictate terms.

As at Newlands, England’s top-order batsmen failed to capitalise on a series of good starts, with Zak Crawley‘s 44 the top score of a spit-and-sawdust sort of day. Without much in the way of assistance from the pitch, South Africa focused instead on bottling up the scoring, Keshav Maharaj wheeling away to good effect as England lost 4 for 78 between the 31st and 65th overs.

However an unbroken stand of 76 for the fifth wicket between Ben Stokes and Ollie Pope saw the tourists edge back on to the front foot.

Pope shone in particular as the shadows lengthened on the Eastern Cape, showcasing the sort of strokeplay that has seen him compared to Ian Bell. The second new ball was dispatched to the ropes three times in as many deliveries from Anrich Nortje, Pope following up a whippy on drive with one crunched through the covers, and he skipped along in relatively carefree fashion compared to his colleagues.

For South Africa, Kagiso Rabada claimed two wickets, despite twice being overlooked for new-ball duties – and his roar of celebration at toppling Joe Root’s off stump said plenty about the arduous nature of bowling on such a sluggish surface. All the pre-game talk about the wind assisting swing in Port Elizabeth seemed to have almost literally become a case of shooting the breeze, as the stultifying atmosphere left South Africa’s attack sweating hard for their successes.

Faf du Plessis must have been grateful for the precision of his spinner, whose efforts from the Duckpond End at least allowed the South Africa captain to regularly rotate his seamers. Maharaj came on shortly before lunch and had figures of 30-10-54-1 when the second new ball arrived during the evening session; he was unlucky not to have added to his sole success, too, finding appreciable turn from a surface that is predicted to become even drier over the coming days.

It was du Plessis’ leg theory tactics that brought South Africa their initial success, and England then threatened to wander down a dead end as the runs dried up. Maharaj only conceded 18 runs from his 16 overs between lunch and tea, and his efforts in tying down Joe Denly – who faced 100 balls for the ninth time in 13 Test innings but once again could not turn that base into a significant score – resulted in a wicket shortly after tea.

Denly’s attempt to cut a ball from middle and off stump was his undoing, though Maharaj had Quinton de Kock to thank after the wicketkeeper spotted that the ball had brushed pad fractionally before hitting the bat. Maharaj caused Stokes plenty of discomfort early in his innings, too, twice failing with reviews as the ball spun back in sharply from outside the left-hander’s off stump.

Rabada then scythed through Root, with England’s captain left looking suspiciously at the pitch after playing back to a delivery that seemed to keep low, and that left Stokes carrying the weight of England expectations. Fresh from being award the Sir Garfield Sobers Trophy as the ICC’s player of the year, he cut a more workaday figure in compiling 38 from 86 – although the significance of his wicket was clear when South Africa again turned to the DRS late in the day, only to lose the review after Vernon Philander’s delivery was shown to be missing off stump.

Root’s decision to bat first was vindicated by somnambulant morning session, during which the Sibley and Crawley batted through with little drama – becoming the first England openers to reach lunch without being parted on day one of an overseas Test since Alastair Cook and Andrew Strauss in Barbados more than a decade ago.

South Africa curiously chose not to hand Rabada the new ball but Philander and the debutant Dane Paterson found little in the way of assistance from a pedestrian St George’s deck. When Rabada did enter the attack, he did cause a minor ripple as Crawley, perhaps spurred on by memories of their brief second-innings duel in Cape Town, twice played instinctive pulls shots that nearly came to grief.

Sibley had looked the more composed of the two, as befitting a man who scored his maiden Test hundred 10 days ago. He took advantage of the extra pace provided by Nortje to score four of his five boundaries, including one well-timed clip through mid-on, but fell to Rabada after the lunch break when he was taken by the man place deliberately as backward square leg for a fend off the body.

South Africa’s leg trap paid dividends again when Crawley was snapped up in a similar position by the diving Rassie van der Dussen, who clasped the ball gratefully after it had squirmed free from his initial one-handed attempt, sending England’s newest opener back six runs short of a first Test half-century.