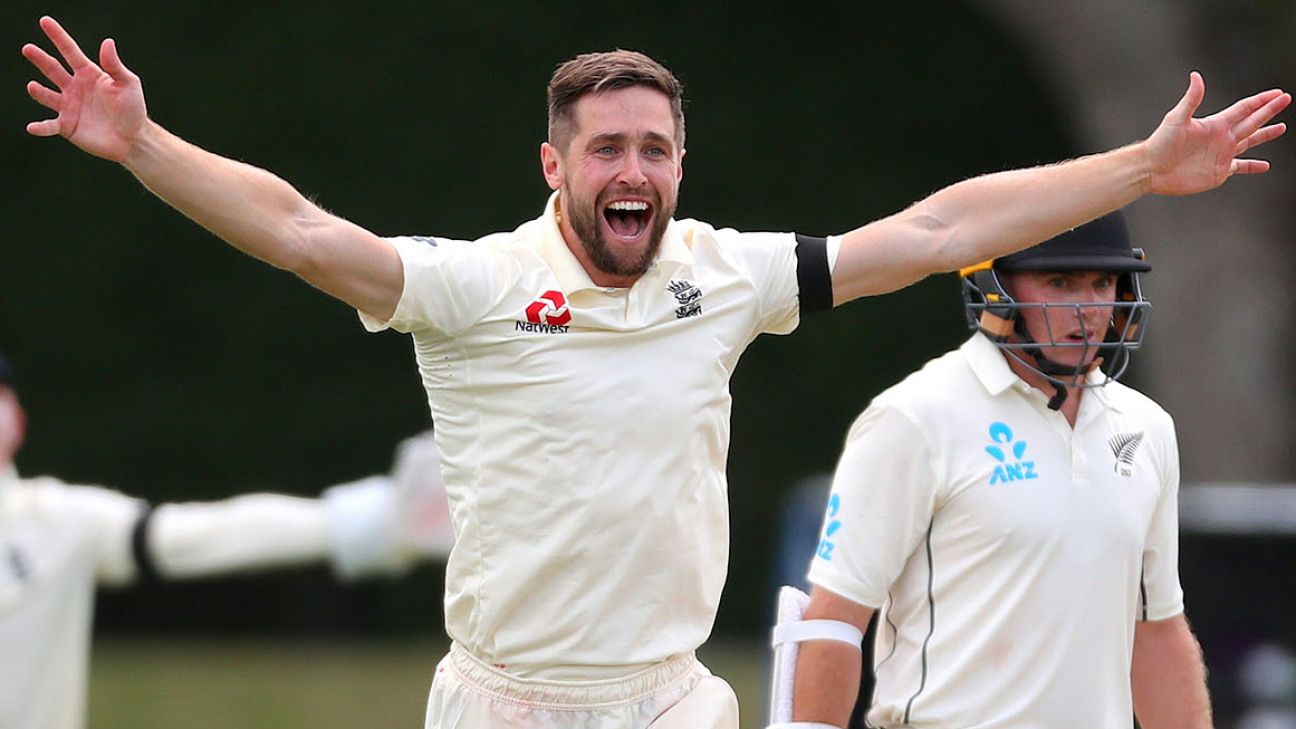 Chris Woakes may have bowled himself on to the South Africa tour after emerging as the pick of England’s seamers on the first day of the second Test in Hamilton.

A week ago, having been passed over for selection for the first Test, it looked as Woakes’ chances of making that tour were receding. It was not just that he had fallen behind the seamers on this trip, it was that England are hoping to recall James Anderson and Mark Wood for that tour. Clearly, competition for places is likely to be ferocious.

But his recall here – a recall Woakes admits surprised him a little – has given him another chance. And by claiming two big scalps – Kane Williamson and Ross Taylor are both in the top four run-scorers in New Zealand’s Test history, after all – Woakes has to be right back in contention.

It probably did Woakes no harm to miss the carnage of Mount Maunganui. Not only is it unlikely he would have enjoyed figures any more flattering than his colleagues’, but it meant he came into this game a little fresher than the rest of the attack and with his long-standing knee issue under control. He was, notably, the second quickest of the bowlers – only Jofra Archer bowled faster and, even then, not always and not by much – and generally the most probing on a top of off stump line and length.

But we pretty much expect that from him. While there have been one or two disappointing performances in Woakes’ career – he has admitted previously he thought his Test career may be over after the Centurion Test of 2016 – he has generally bowled respectably even if he has lacked potency. His problem is that, with anything other than a Dukes ball, he struggled to gain the lateral movement to trouble Test batsmen on good pitches. Before this match, he averaged 23.45 with the ball in 19 Tests in England and 61.77 in 12 Tests overseas. Put simply, his struggle has been a microcosm of England’s bowlers in recent years: they just haven’t been able to get the Kookaburra to do enough. It looked as if, overseas at least, England might be considering moving on from Woakes.

But even if Woakes is, at 30, something of an old dog (in fast bowling terms, anyway), he is still looking to learn new tricks. So in recent months he has added the wobble seam delivery – used to such devastating effect by Stuart Broad against David Warner – to his armoury and here gained just enough movement from conventional outswing to pose a threat.

Williamson fell to just such a conventional delivery. Forced to play, he was unfortunate enough to see the ball leave him a fraction and carry to first slip. Later Taylor, perhaps frustrated by Woakes’ control – Taylor’s strike rate against him was the slowest of any of the England bowlers – attempted to cut one too close to him and edged towards the cordon.

We have to be careful in judging on such a small sample size. This pitch does have an unusually lavish covering of grass – 16mm, which compares to somewhere between 4-6mm usually seen in England – and Woakes has claimed only two wickets, after all. But while his colleagues struggled to gain the movement – particularly the swing – anticipated when they inserted New Zealand, Woakes did manage to gain movement he has rarely generated with the Kookaburra. Most pertinently, while Sam Curran, straying on to the pads of Latham all too often, conceded more than four an over and gained little swing, Woakes looked both more dangerous and proved more frugal. If there is space for only one of them in the 16-man South Africa tour party – and it may well be they both travel – the selectors have a tough decision to make.

“I was a little surprised by the recall,” Woakes admitted. “When you’re not picked for the first Test of a two-match series you feel something has to go drastically wrong to get a go. But they decided that we were going to go with the seamer rather than the spinner.

“I don’t want to give too much away to the opposition but generally to the left-hander I was using the wobble and to the right-hander I was trying to swing it,” Woakes said afterwards. “I’ve worked hard in the nets on quite a few different skills, not just the wobble seam. The Williamson wicket left him a fraction.”

Whether Woakes’ performance justified England’s decision to bowl first and drop Jack Leach was debatable. It seems their logic for inserting was that they expect the pitch to be at its best for batting on the second, third or even fourth day. And they may well have a point. “We didn’t think we were going to bowl them out for 200,” Woakes continued.

And their logic for dropping Leach? It seems they have been underwhelmed by the lack of bite in his bowling to date and are happy to rely on Joe Root and Joe Denly to provide spin bowling as required. And it’s true Root, who had BJ Watling dropped at slip on 31, didn’t lose too much in comparison to Leach in the first Test. It is also likely the team management were aware of Stokes’ knee problem and wanted to provide some seam-bowling cover. Leach is still likely to make the South Africa (and Sri Lanka) Test squads, but Moeen Ali‘s stock has probably risen in his absence. Still, while England probably didn’t miss Leach on day one, they may wish for his variation before the end of the match.

The other contentious selection was Ollie Pope with the gloves. Despite his relative callowness – with just five first-class games as keeper behind him, he is England’s least experienced Test keeper since Dick Young, who had kept in four matches, did so (in spectacles) in 1907 – he barely fumbled a ball all day and impressed with some acrobatic takes. While the scoreboard will show he conceded four byes, they came from an Archer bouncer that Robert Wadlow, sitting astride a giraffe, would have struggled to reach. Put simply: Pope impressed. Well, you didn’t expect him to show fallibility, did you?