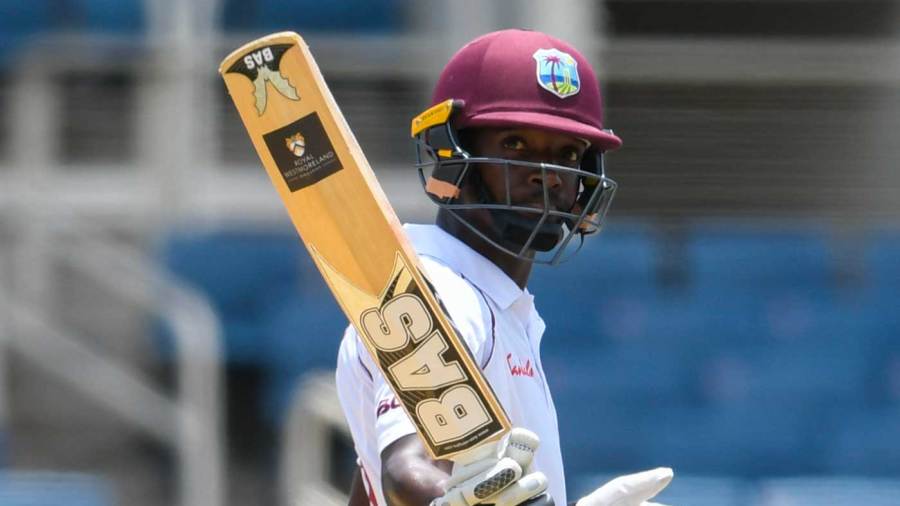 Half-centuries from Shamarh Brooks and John Campbell took West Indies past Afghanistan’s first-innings total of 187 in an action-packed first session on the second day of the one-off Test in Lucknow on Thursday.

At lunch, West Indies had moved to 195 for 5, with Brooks unbeaten on 75 and Shane Dowrich giving him company on 25.

On a surface that has aided spinners from day one, West Indies decided the way forward was to attack. The day started with Campbell deploying a variety of sweeps – slog, lap, reverse – to counter the left-arm spin of Amir Hamza as he took 15 from the bowler’s second over of the day. He brought up his maiden Test fifty with a single to deep square-leg, courtesy a conventional sweep.

Brooks was more orthodox at the other end but no less attacking. In one Rashid over, he struck two fours and a six as West Indies went past 100. Campbell and he added 82 in just 19.1 overs before Hamza broke the stand with Campbell’s wicket for 55, scored in 75 balls. But it was as much Ihsanullah’s wicket too, as the slip fielder, upon seeing Campbell line up a lap sweep, moved swiftly to his right and put in the dive to pouch the ball one-handed.

Shimron Hetmyer and Roston Chase didn’t last long after that. Hetmyer was trapped lbw by Rashid Khan and Chase fell to left-arm wristspinner Zahir Khan, caught at short leg off an inside edge.

At 150 for 5, it looked like Afghanistan had clawed their way back, but their hopes were thwarted by Dowrich. Like other batsmen before him, Dowrich too started in an aggressive manner, hitting three fours in no time to move to 15 off as many balls. But it wasn’t that the Afghanistan spinners didn’t create any chances. Apart from a couple of loud lbw shouts, Rashid got Brooks to edge one behind but Afsar Zazai failed to latch on.

With lunch approaching, Brooks and Dowrich adopted a more defensive approach and ensured West Indies went into the break without losing further wickets.