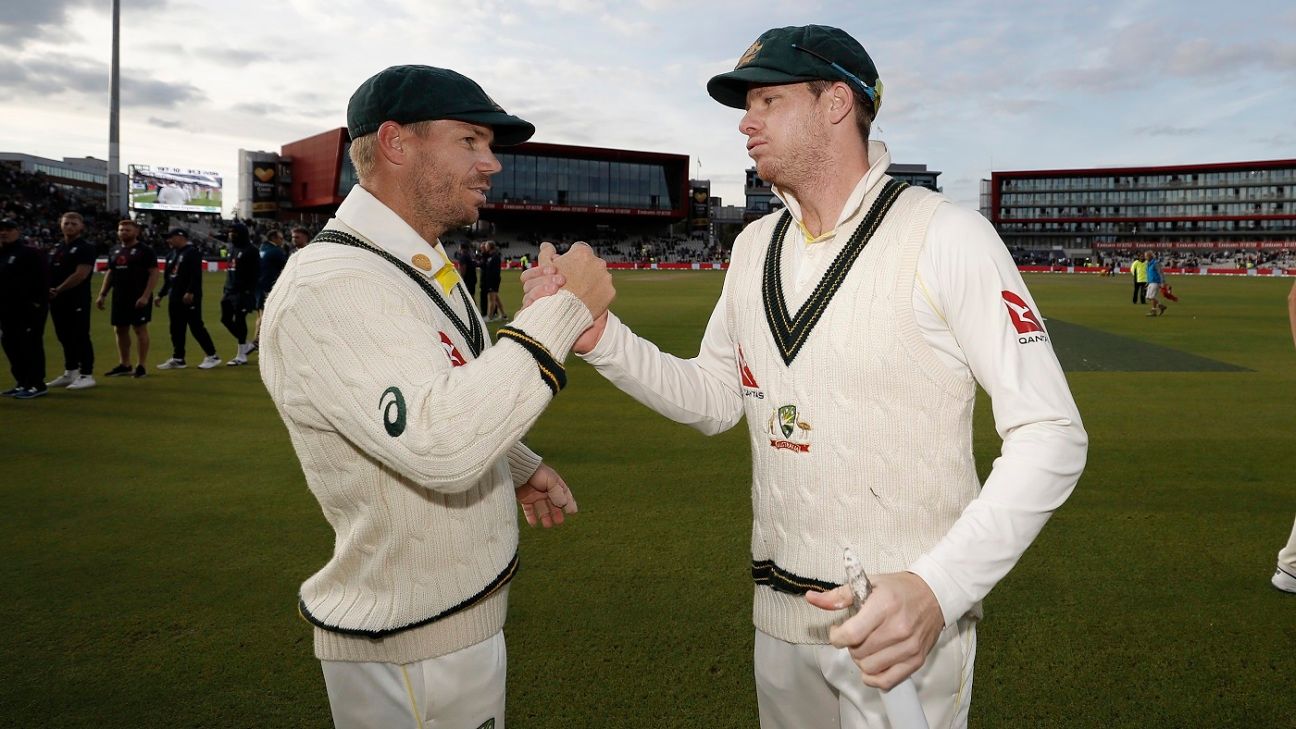 Steven Smith‘s unrivalled batting genius, the platform upon which Australia retained the Ashes in England for the first time in 18 years, will buy time for the younger batsmen around him while also allowing David Warner to work his way out of the slump he has endured this series at the hands of Stuart Broad.

Australia’s coach Justin Langer was perhaps the most relieved man at Old Trafford when the final wicket fell, having helmed a diligent Ashes campaign in terms of planning, attitude and selection. But he admitted that Smith’s talents, affording the tourists a priceless flow of runs in a series otherwise dominated by bowlers, had dragged an otherwise underperforming bating unit to victory, and described the Australian top six as something of a work in progress.

ALSO READ – Nicholas: Australia have played better cricket for most of the Ashes

“Davey hasn’t had a great series but imagine how good the team will be when he starts having a great series and we’re hopeful he’ll do that in the next Test match. The other guys are learning as they go and that’s all part of the experience. I said at the start of the series I thought the team that bats best will win the series because both teams have got very good bowlers. Our bowling attack is world class, we’re very lucky and we’re going to have to keep working on that batting.”

The most productive batting by any Australian other than Smith has come from Marnus Labuschagne, and Langer pointed to the similar degree of hunger for runs, ideas and practice that both Smith and the younger Queenslander possessed. “He’s played well, he’s played really well. I just love the energy he brings to the group,” Langer said. “I love how hard he works, he’d do it for nothing, he’d cut his leg off to play – sorry if it’s another cliché.

“He loves playing cricket and at the end of the day, Warnie asked me on Sky about Steve Smith – what’s the defining factor about Steve Smith: hunger. He has got hunger. I’ve never seen anyone practise more or love batting more than he does and I’ve seen a few guys who love batting. Same with Marnus, he just loves the game of cricket and if there’s one trait I know about all the great players – they love the game. It’s no effort to get out of bed every day, it’s no effort to work hard, it’s no effort to get into the contest.”

Reflecting on the success of the campaign,Langer spoke warmly of Paine’s leadership, particularly the discipline that allowed the Australians to stick rigorously to their plans in the field – essentially devised to dry up England’s scoring and create wickets through a combination of pressure and more judicious use of the Dukes ball by the pacemen.

“We knew this was going to be a huge winter with the World Cup and the Ashes,” Langer said. “I just love Tim Paine, I think he’s great – we have a great relationship and that’s how it should be. A lot of people behind the scenes, not just the leadership group, do a lot of work as well. We’ve got a couple of analysts back in Brisbane who we’re really proud of. We worked out a game plan we thought would help us win this series. We used experience from 2004 against India and how we had to be really disciplined as with our approach. He’s very disciplined as a captain.

“This has meant a lot to him, Tim Paine, from where he’s come from. And I think the big lesson from the last Test actually is we all wanted it so much, sometimes we want something so much you just hold on a little bit tight. Hopefully we’ve learned some lessons over the last week. The other important thing about Tim Paine as a captain and this team, we haven’t won overseas for some time. So to win you’ve got to learn how to win, and that’s why today is so important to us.

“Had it have been another draw, or had we’ve just quite not got over the line and it was two in a row, that’s tough on the team and for his captaincy, he’ll take confidence out of that. And so will the team.”

There was acknowledgement too, of how the likes of Steve Waugh – who flew back to England for the forth Test having missed Headingley – and Ricky Ponting had provided additional counsel on the tour, after Langer pushed hard for their direct involvement. He cited how, as a young player, both he and Ponting benefited from then cricket academy head coach Rod Marsh bringing in Ian and Greg Chappell and John Inverarity, among others, to mentor his generation into the group that led Australia to the top of the world.

“It’s more about the big picture, about helping our guys develop as leaders and to have those sort of guys around and get a feel for what their experience of what is to be winners in the Australian cricket team,” Langer said. “Having Stephen around, it’s been great, of course it’s been good for me and it’s been good for the young blokes more importantly. Same with having Punter around. Glenn McGrath, if he comes into the changeroom in a little while, you wait, you listen to the noise that happens. The boys had him there after the first Test match win – they’re like their heroes.

“When Glenn McGrath walks in, and I hope he does, you wait to listen to the noise because they just love him. I’ve said for a long time in Australian cricket when I was a youngster playing at the Cricket Academy, Rod Marsh was the coach – he used to bring his mates in like Ian Chappell and Greg Chappell. To learn from those people, oh my gosh, it’s a great grounding for a young Australian cricketer so that’s why these guys are here. It’s a great opportunity for them to rub shoulders and learn from really passionate and past great players.”