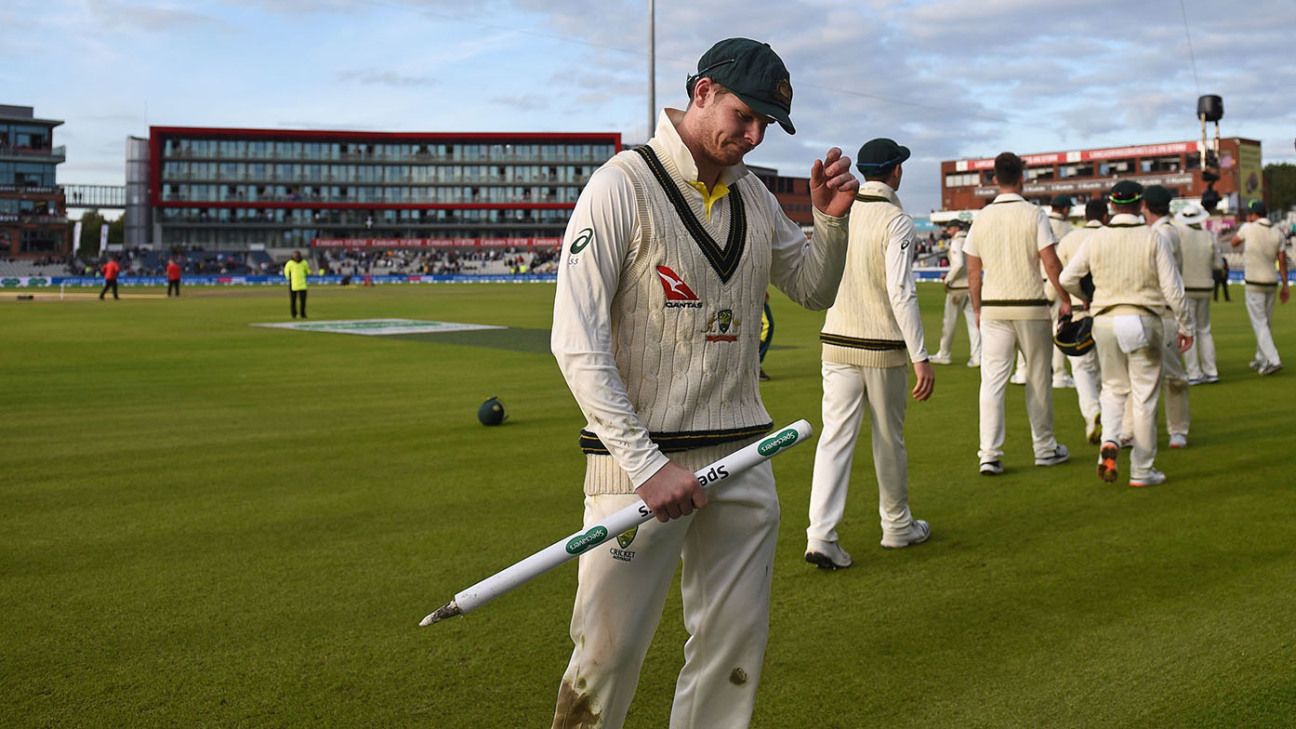 Australia’s players loosed a blood-curdling collective scream upon Manchester when umpire Kumar Dharmasena’s finger raised to deliver them an Ashes victory on English soil for the first time since 2001. If there was a brief moment’s purgatory while DRS confirmed the news, it contributed to a far more exhilarating moment than on that last distant occasion.

That corresponding instant 18 years before had been the apogee of anti-climax, as the winning run at Trent Bridge arrived from an Andy Caddick no-ball delivered to Mark Waugh: 3-0 in three Tests, six Ashes series wins in a row for the world’s best team. Quite ho-hum really.

Just as so much has changed in the intervening years, there could not have been circumstances much more different in how this victory was finally achieved: all adrenaline, broken tension and sheer elation at doing something none of these players had experienced as anything other than schoolboys staying up late to watch on television back home. It had been a more similar sensation in 1989, when the Australian team, also at Old Trafford, launched into collective celebration on the team balcony upon the achievement of a nine-wicket victory.

Whether or not this win sets up 17 years of domination over England, as that one did, remains to be seen. But it was an entirely fitting finish all the same: Josh Hazlewood, alongside Pat Cummins, Australian twin pillars of pace strength in this series, followed up a stinging short ball to Craig Overton by bowling his umpteenth scrambled seam ball in the three Tests he has played, moving the ball late and sharply off the pitch to find England’s No. 8 the plumbest of lbws.

It had been harder for Australia than England to win lbw verdicts across this series – at the end of the match the ledger read 18-8 in favour of the hosts – but an ever-increasing and improving focus on hitting the top of the off stump had been central to how Australia found a way to close out the series the very next match after their enormous trauma at Headingley. That day, against a rampant Ben Stokes, Australia’s bowlers had failed to look for the stumps enough, and had also lost their heads tactically.

This time, however, the mistakes were not repeated, neither by the bowlers nor the captain Tim Paine, who enjoyed one of his very best days of the series to help ensure the urn was retained without the need for a decisive closing encounter at The Oval. On day five of a Test, with the ball getting old and not too much happening, captains occasionally need to make things happen – throw bowlers round to opposite ends, use some part-timers, change up their fields. It’s something the likes of Mark Taylor, Michael Clarke and Michael Vaughan were considered masters at, less so Ricky Ponting and Alastair Cook.

Paine had it all to do in terms of his leadership reputation after the conclusion of the Leeds Test, where by his own admission he had got plenty of things wrong. Here though he gained the morning’s first breakthrough with a last-moment decision to replace Mitchell Starc with Cummins, and did the trick again in mid-afternoon when he broke up a tandem between Starc and Nathan Lyon. First, he introduced Marnus Labuschagne in place of Lyon. Next, he replaced Labuschange with Travis Head. Thirdly, he swung Labuschagne around to the opposite end for the final over before drinks. Lastly, he brought Starc back on from the other to the one from which he had operated in the first place.

“All adrenaline, broken tension and sheer elation at doing something none of these players had experienced as anything other than schoolboys staying up late to watch on television back home”

This all had very little to do with Starc getting his first ball of the over bang on target to Bairstow, but the chopping and changing may well have disrupted the batsman’s rhythm just enough to miss it. The lbw verdict from Kumar Dharmasena took England past the last pair of recognised batsmen, and gave the Australians hope that a quick ending would eventuate.

But the 2019 Ashes have confounded expectations consistently ever since Edgbaston, turning this into the perhaps the greatest and certainly the most enthralling series since 2005. Jos Buttler and Craig Overton pushed keenly into line, surviving Australian thrusts with pace and spin beyond the tea break and allowing conversations to start about how long there was remaining, how likely the light was to hold, and whether the tourists were starting to tighten up again as per Headingley.

Paine, though, worked in concert with Hazlewood to make the best use of a ball changed when the original went out of shape, finding themselves the beneficiaries of its greater hardness and, for a rare time this series, a tendency towards reverse swing. Buttler had been defending sturdily, covering the movement, but the deployment of a silly point for Hazlewood brought the extra pressure and judgment error required – as Hazlewood’s well-disguised inswinger snaked into off stump, Buttler resembled no-one so much as Michael Clarke when confounded by Simon Jones on this very ground 14 years before.

Jofra Archer fell victim to fifth-day variation, lbw to a Lyon delivery tunnelling under his bat, before Overton found another ally in the celebrity tail-ender Jack Leach, promoted above Stuart Broad. Fifty balls Leach defended, taking the strike confidently, and seldom looking under major threat even against the second new ball. Once more, though, Paine made a bold and ultimately beautiful call, calling up Labuschagne with a little over an hour remaining. Finding turn out of the footmarks, his fifth ball spat and jumped up at Leach’s gloves, claiming the penultimate wicket in the manner of a latter-day, right-arm Michael Bevan.

At this point, with only one more wicket to get, the Australians might have tightened up once more, but they had learned the hard way to both be more attentive to the mores of playing cricket in England, and to try to relax as much as possible with victory just a wicket away. Paine agreed in the aftermath that this had been a team that put ego to one side and learned, slowly and methodically, how to win in this part of the world. It’s a feat that has been beyond four previous touring teams.

The route to this glory had been pockmarked by the Newlands scandal, a blow to the national team’s psyche but also a valuable moment of reflection, but had also been characterised by plenty of measures intended for learning. Dukes balls in the Sheffield Shield, Australia A tours of England, an internal trial match in Southampton to make a late call on the final squad of 17, and a tactical commitment to shutting down the scoreboard of England, bowling accurately and trying most of all with the bat to survive.

“This group has done it better than most if I am honest, hence the result,” Paine said. “We’ve known for a while England play different than we do over here. This team has made a real effort of putting their ego aside and roll up their sleeves and do the job asked of them, rather than worry about how it looks or the brand or style we play. We want to play winning cricket and need to adapt to conditions that allow us to do that, and this group have done that superbly.”

So the still-newish ball was handed to Hazlewood with 14 overs remaining, and as he had done all series, he tried to move it off the seam and not through the air. Overton was pinned in front, the air cracked with Australia’s scream and the Ashes urn was retained. Paine was elated, pumping his fist as he ran, while nearby the batsman of the series Steven Smith could not stop jumping for joy.

“It’s been a long, long time,” said Paine. “We know how difficult it is to win over here. We are the lucky ones who have been here. Every player has some story or sacrifice which is what makes moments like this so great. It doesn’t happen, retaining the Ashes in England, very often but we’d like to win next week.”

There was a period in recent Australian cricket history when winning the Ashes in England felt like a birthright; this team have deservedly regained what was somehow lost along the way.

Umar Akmal suspended under PCB’s anti-corruption code
DJ Rabada in the house: Kagiso Rabada is on song again – with help from Dad
‘We played a few too many shots because of the turn’ – Craig Ervine
Arthur calls on Sri Lanka’s top order to get big scores
R Ashwin hopes to get back to batting more instinctively