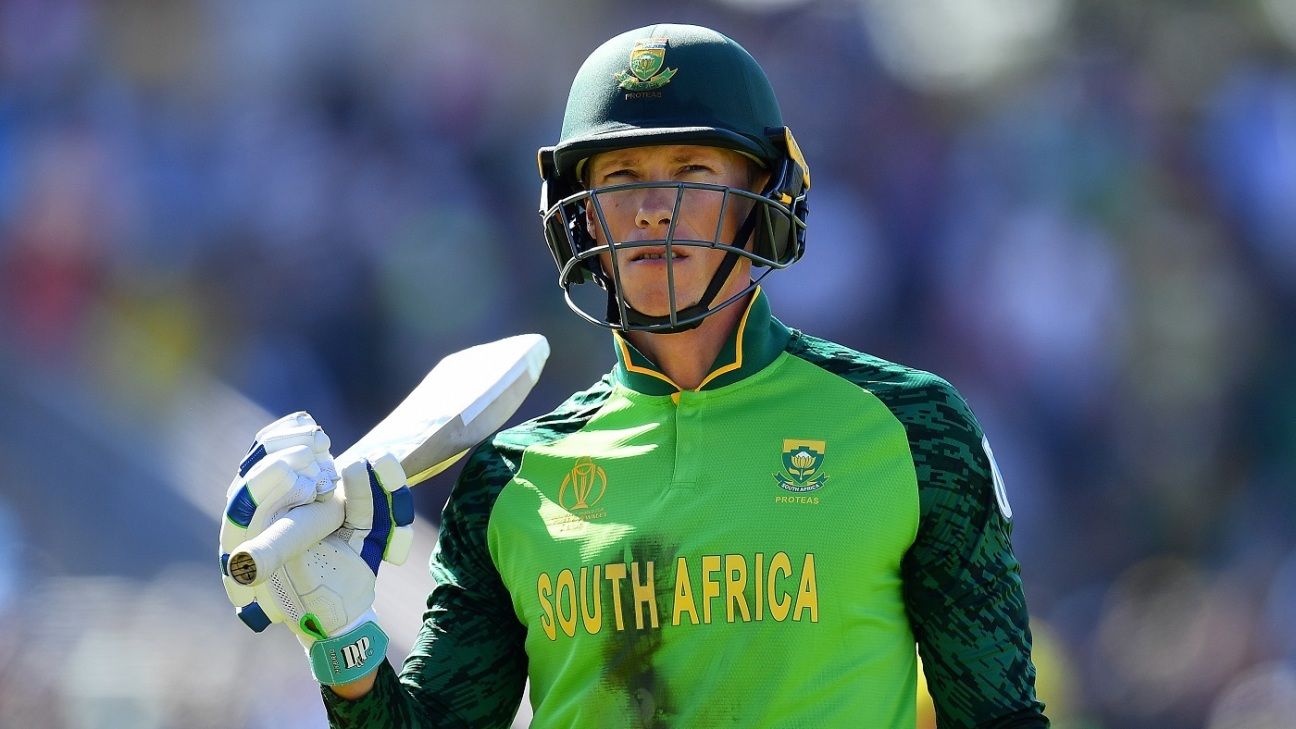 Rassie van der Dussen has qualified for a Cricket South Africa contract for the 2019-20 season, having cleared the revised threshold during South Africa’s World Cup 2019 campaign.

In an otherwise lacklustre campaign, van der Dussen was among South Africa’s bright spots, scoring 311 runs at an average of 62.20 and a strike rate of 90.40. He will become the 17th player on a national contract, taking the spot left vacant following Duanne Olivier‘s decision to take the Kolpak route.

In the women’s team, wicketkeeper Sinalo Jafta is one point away from qualifying for a full 12-month contract. She could earn that point if she is selected for the women’s upcoming tour of India in September and plays in at least one match.

“Rassie’s promotion is thoroughly justified on the back of a brilliant debut season at international level and has also served as an inspiration to all aspiring cricketers at domestic level of what can be achieved by showing top-class form on a consistent basis,” CSA chief Thabang Moroe said.

South Africa will also be sending several players, including those who have played for the national team and those who are viewed as potential candidates, to a spin camp that will take place in Bengaluru from August 17 to 23. Both South Africa A and the national team will be touring India in the final quarter of the year. But Moroe indicated that the move to familiarise themselves with subcontinent conditions was also keeping in mind the long term, with the 2023 World Cup scheduled in India.

The group of players includes Aiden Markram, Temba Bavuma and Dane Piedt, who will be accompanied by a number of coaches and technical staff. Former national coach and current South Africa A coach Russell Domingo will head the support staff, and he’ll have former players Ashwell Prince and Paul Adams as batting and spin consultants with him.

“We have identified Aiden Markram, Zubayr Hamza and Temba Bavuma as key Proteas batsmen to benefit from this project and we have also included some of our potential stars of the future such as Janneman Malan and Sinethemba Qeshile, who have already both played for the Proteas, as well as Matthew Breetzke,” Moroe said.

“The batting group is completed by two of our most consistent runs scorers in franchise cricket in Pieter Malan and Edward Moore. The bowling group is headed by the experience of Dane Piedt and includes highly promising talents, among them being Bjorn Fortuin, Tsepo Ndwandwa and Senuran Muthusamy.

“It is a fact that most international cricket is played on the subcontinent these days and we have to look ahead not only to the tours on the immediate horizon but the next edition of the World Cup in India in 2023.”