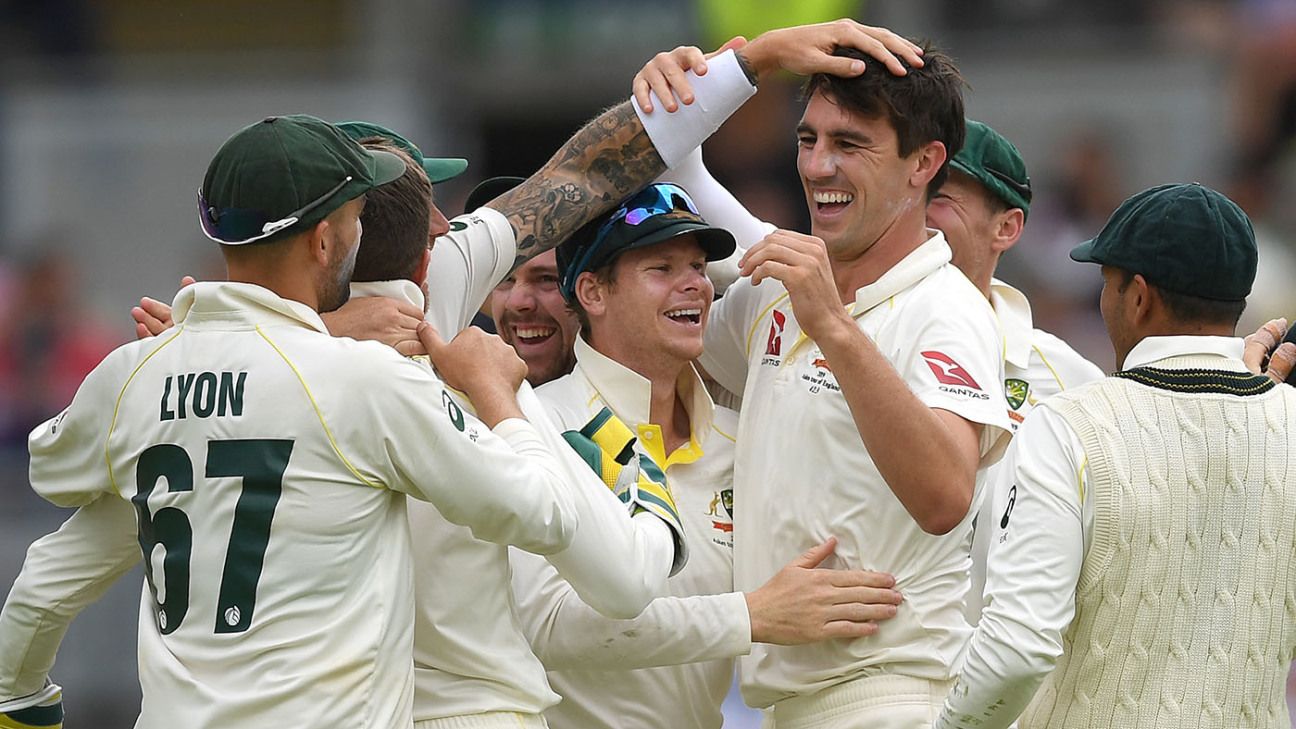 It took Pat Cummins until day five of the first Ashes Test to find his best rhythm. When he did, he conjured life from the Edgbaston pitch where previously there had been none.

Just ask Rory Burns, taken in the gully off a short ball that reared in a fashion more common in Perth than Birmingham. Or perhaps Jos Buttler, bowled by a ripping delivery that held its line to flick the outside of the off stump immediately after lunch.

These are the kinds of spells for which Cummins has fast developed a reputation, delivering the big wickets for Australia in the way that Glenn McGrath once did in England, or Merv Hughes before him. For this reason alone, Cummins is shaping as the one member of the Australian pace attack to play all five Tests, in a year where he has also crossed the 100-wickets barrier in just 21 matches and been rewarded with the world No. 1 spot on the ICC rankings.

“It’s those kinds of spells you remember the most when it’s to win a Test match,” Cummins said of his fourth-innings effort at Edgbaston. “Day-five wicket, didn’t feel like there was a lot in it for us bowlers up to that point, but one of those moments where I felt in really good rhythm, the ball was hard, there seemed to be a bit of zip in the wicket and that’s when I love it. Trying to break up a partnership or get that crucial wicket to win the match – I love that, so I enjoy that role when it comes off, when it doesn’t, it’s normally pretty hard work, but yeah I enjoyed that day five.

“I felt like with each spell I got a little bit better and better. I haven’t played a lot of red-ball [cricket] coming into the first day’s play, and I think just trying to find that tempo of Test cricket – it’s slightly different to white ball, and I think mixed into that the excitement and the nerves of first spell in Ashes over here. I was pretty pumped up and felt probably by the lunch session I was into my work and pretty happy how I was going. Definitely by the end of the game I felt a lot better than that first spell.

“First Test I came in pretty fresh for that Test match and luckily we had a big break, so I knew that was the carrot at the end of the game that we were going to get 10 days off, so it was pretty easy to tear in that last day. I feel really good; [I] haven’t really done much in the last few days and [have] just build up nicely. I feel 100%.”

Cummins’ dual defeats of Buttler were a feature of the Test, unsettling England’s middle order and demonstrating the value of a tight line with bounce. Eight balls, two wickets and no runs conceded were a considerable feather in Cummins’ cap, given Buttler’s destructive capabilities for England in any format of the game. Buttler has conceded that Australia won the battle of “who can own the top of off stump” in Birmingham, something Cummins will want to do again at Lord’s.

“I felt like both times I was into my work and my rhythm was pretty good,” Cummins said. “We’ve all got our plans, but most of the times its around off stump or fourth stump and for the most part of the game we bowled well to everyone. Fortunately it came off against someone like Jos both times early, but we’ve got our plans to all of them, none of them too flamboyant, they’re normally just around that off stump, but he’s a dangerous player, and if you can get him early, it goes a long way towards winning the game.”

Cummins spoke, too, about how Australia’s belief had grown across the five days of the opening match, a sequence that should have them in decent fettle for Lord’s. He is certainly eager to play in all five Tests, if possible, a scenario that will be opened up by how much rest is attained between innings and matches, with the relatively generous 10-day break between Edgbaston and Lord’s not to be repeated again this series.

“I think the good thing was, the first couple of days we were behind in the game and with each day, we felt like we were getting more and more into the game, so it was a continual build-up of, ‘are we really going to do this; we’re on top now; all right, it’s ours to win,'” Cummins said. “So it’s one of those moments you finish the game, you sit together and have a beer in the change room and you reflect on what you’ve achieved.

“We’ve had a bit of a break, so we’ve been able to reflect on that before we now come up here and concentrate on the next game. I don’t think it was lost on any of us. For more than half the team it was our first Ashes win here in England, so it’s big. I think everyone would like to play all five.

“I think it’s one of those things where it’s just great that we’ve got that flexibility, so I think every game you’re going to pick your best three bowlers you think are going to win that match. I guess we’re lucky we’ve got six guys here who are a real chance of playing every game. Personally, I’ll be hoping to play every game, and if I’m fully fit and bowling well I expect to, but it’s good we’ve got plenty of bowlers here.”

Lord’s, with all of its history, pomp and circumstance, invariably provides Australian teams with a lift, even if Cummins’ first experience of a Test here was to hear a sound other than that of bat on ball. Keeping things simple has long been a strength of Cummins in knowing how to handle any given match or scenario, and he has taken a similar view about the Lord’s slope.

“I was running drinks during 2015 and a pretty special occasion,” he said. “The first thing that stuck out to me was everyone starts popping champagne bottles with the first ball, so on the sideline I remember dodging corks for the first hour. So, its going to be pretty exciting.

“It’s a funny one, it seems like everyone has a theory on which end to bowl here. People reckon they nip it down the hill, people reckon they nip it up the hill, I’ve got no idea. You normally settle into an end. I haven’t bowled enough here, played one-dayers and haven’t found too much of a difference, but [I] don’t know. I’m sure it’ll come up but it’s not a massive factor I don’t think.”