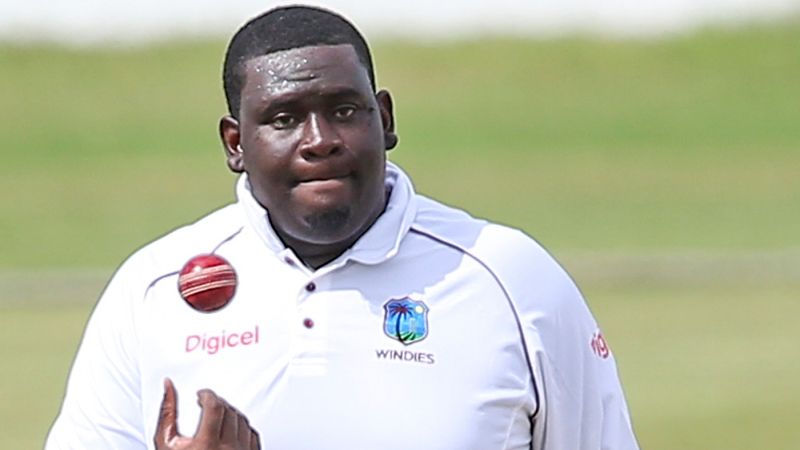 Rahkeem Cornwall has finally made it to the West Indies Test squad. The 26-year old hard-hitting offspinning allrounder was among the 13 men picked to play the two-match series against India starting on August 22.

There was another highly-rated young player on the fringes, but fitness issues ruled him out. Alzarri Joseph, who was part of the team that beat England earlier this year and also made a splash in the IPL, is still recovering from injury.

Cornwall made his first-class debut in 2014 and has since become a regular for Leewards Islands, even captaining them earlier this year. He has 260 wickets from 55 first-class matches and finished as the leading bowler in the most recent regional four-day tournament.

“Rahkeem has been performing consistently over a long period of time and has proven to be a match-winner, so we believe his elevation to the Test squad is merited at this time,” Robert Haynes, the head of CWI’s interim selection panel, said.

“We believe he can provide an attacking option to our bowling attack with his sharp turn and extra bounce. He can also lend a bit of depth to the batting, so we are looking forward to him coming into the squad and making a valuable contribution.”

Cornwall has also been part of several West Indies A teams, including the one that played against India’s last month. Batting in the lower-middle order, he scored two half-centuries and picked up four wickets. He is a striking presence, standing over six feet tall, capable of hitting effortless sixes.

Joseph, meanwhile, was last seen in the IPL where he picked up a record-breaking 6 for 12 on debut for Mumbai Indians but played only three matches before suffering a tear to his right arm.

“Alzarri is undergoing remedial work and we are monitoring his recovery,” Haynes said. “But we do not think he is ready yet to last five days of a gruelling Test match. He represents a key part of West Indies future and we do not want to rush him back. We have two important series coming up later in the year in India and we want to be very careful how his recovery is managed.”

The only other player missing out from the squad that beat England in the last Test series they played was left-arm spinner Jomel Warrican.

This series will mark both India and West Indies’ debut in the World Test championship. At the World Cup, Chris Gayle mentioned that he might possibly want to play one more Test match before retiring but he has not been selected in this squad.

‘Won’t survive if you don’t produce match-winning contributions’ – Mohammad Hafeez
‘I was trying not to look too buzzing!’ – Mark Wood revels in allround fireworks
Firebird Hamish Bennett ready for his New Zealand rebirth
Final chance for India, New Zealand to firm up on best XI
Anrich Nortje is last man to leave as South Africa endure the party that wasn’t